DARPU and an Example of Monetization Stack

One of the key metrics people measure a game (or other products) is called DARPU (often just ARPU), Daily Average Revenue Per User.  Depends on the type of game, and how well the game is optimized, the ARPU can be very different. Think of a monetization stack as a break down of what features/categories that contribute to the ARPU.

We’ll look at an example causal arcade game. It has ARPU of 6 cents. In the chart below, we can see how each of the features contributes to overall proportion of the revenue. Ads is self explanatory.  The game has Energy, which kind of like lives, which are required to play a level in this game. It limits how many failures you can have before you have to purchase energy/lives to keep trying.  The game also has Pre-Game Power-ups, which means when you select a level to play, you get a chance to purchase a power-up (think of the “Color Bomb”, “Jelly Fish” and “Striped and Wrapped” in Candy Crush Saga). In addition, the game offers In-Game Power-ups, which means while you are in middle of a game session, you can purchase additional power-ups (think of the “Lollipop Hammer” in Candy Crush Saga) to help you strategically. The game also offers continues when you don’t pass the level, and get a chance to keep playing to beat the level.  In this game, these features all contribute different amount. 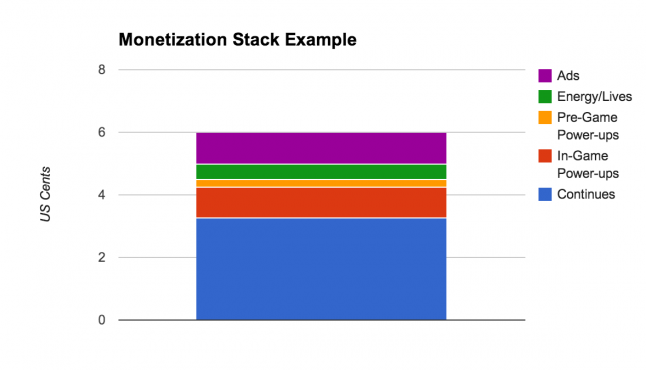 You can get real data for a monetization stack after your game is launched, but even before you start to  design game, you need to think about how your stack will most likely looks like. When you pitch a game, you’ll often asked the question how are you going to make money. Monetization stack helps you answer that question.

While within each genre, the different games will monetize different amount, but if you looked at enough games within that genre, patterns will emerge.

Best games in each of the genres will monetize about the same range on the same platform in the same market.  Experienced game producers or product managers often will know approximately what is a good ARPU for a game of certain genre. For example, best Arcade/Causal games probably will have an DARPU around 6 cents to 8 cents on iOS.

A deeper level analysis and research will reveal how much each of the major features/categories contribute to the monetization stack. Here, often there is pattern also. It is an still an estimate, but you’ll get a sense of how much a similar features will contribute to ARPU.  For example, Ads will often attribute 1 cents towards ARPU. In many arcade games such as Candy Crush Saga, “Continues” will monetize much greater than In-game Power-ups, which in turn will contribute more revenue than Pre-game Power-ups. The Continue mechanism is especially powerful and proven, which will typically contribute 50% to 60% of the ARPU.  (Although I don’t know the exact numbers of CCS, and I can’t reveal the exact monetization stacks of games that I managed, but I had done enough Arcade games to know that is a good estimate.)

Based on your research data, you can create your planned monetization stack, more confidently answer the question how you are going to make money, and justify the numbers.

During your planning stages, a monetization stack (even if it is just an estimate or target) will help you prioritize features. Perhaps even drop some features. For example, if we know that In-Game Power-ups often make more money than Pre-Game Power-ups, perhaps more thoughts should be put into the “in game power-ups.”

If you knew in most Arcade games, Continue mechanism is a main contributor to revenue, then it is important to think through what does continue mean in your game. For Candy Crush Saga, that is extra moves; for Ruby Blast, that is extra time. For other games, it may not be very straightforward. This will require the design of the winning condition (what does mean to beat a level) to accommodate this mechanism. It would be much harder to try to add this after game design (especially the winning condition) is baked.  I saw a lot of Causal/Arcade games that don’t have this feature, then they are leaving money on the table.

After game is launched, the monetization stack can be used as diagnose tool. For example, if your ARPU isn’t as high as comparable games, then you can dive deeper by looking at your actual monetization stack from data. Often you’ll find a category didn’t contribute as much as expected or as competition, perhaps this feature is badly designed. It would help you focus your resource to fix those features. It also may show gaps between what your monetization stack looks like vs. other game’s monetization stack. You can try to close the gap by adding the right features.

Also, this and couple other articles on monetization wrote by me was published on gamasutra.

User Funnels Are Vital to the Customer Experience

Looking to attract and retain more customers? User funnels and the user journey are key to a great customer experience.

What is Product Retention and How Can You Improve It?

Retention is a great way to measure business health and supercharge revenue. Discover what it is and how to improve it with Moesif