Spring Boot is a popular framework for creating powerful RESTful APIs, and in this tutorial, we will use it to develop a simple API that simulates a credit score rating. The API endpoint we will create will allow a user to retrieve a credit score rating by sending a request to the API. However, it is important to note that we will not be linking up to any actual backend systems to pull a real credit score, instead we will use a random number generator to generate the score and return it to the user. Although this API is relatively simple, it will demonstrate the basics of REST API development using Java and Spring Boot. This tutorial will provide a hands-on introduction to building RESTful APIs with Java Spring Boot.

Before we start, we must ensure that a couple of prerequisites are completed. To follow along and run this tutorial, you will need:

We’ll be using the following settings for our project: 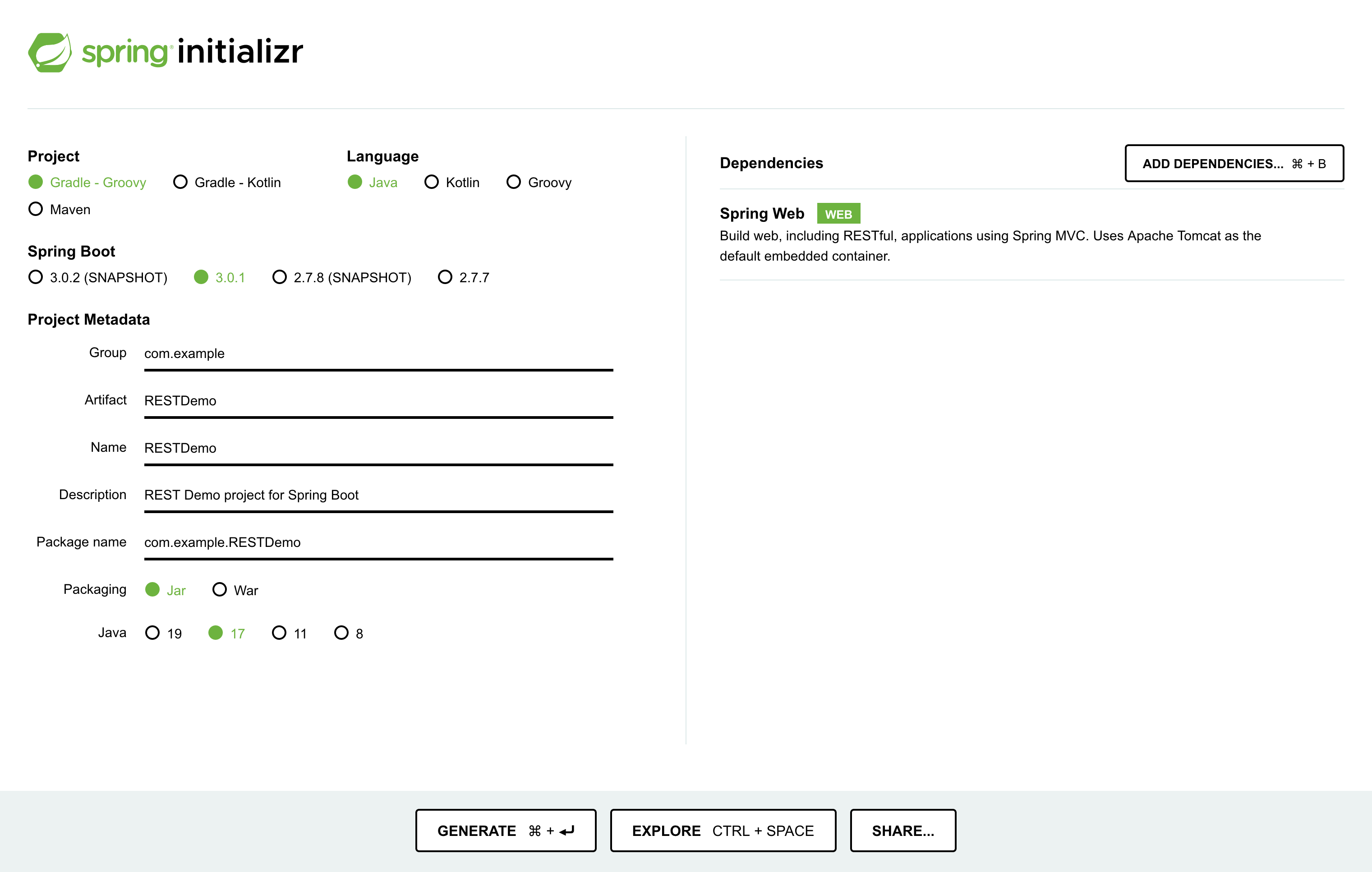 Selecting Generate will initiate a download for the sample project. Unzip and open the folder generated by Spring Initializr, in our case called RESTDemo, in your favorite editor. This is where we will add our API code. Run the following command to ensure our project builds correctly out of the gate.

Adding in The Code

Under the path /src/main/java/com/example/RESTDemo we’ll create a file called APIController.java. This is where we will house our creditScore endpoint as well as the code to randomly generate the return value.

Populate the newly created file with the following code:

Inside this class, there’s a single method called creditscore() which is annotated with @RequestMapping("/creditscore"). The @RequestMapping annotation maps the method to a specific URI, in this case, it’s localhost:8080/creditscore.

This method is also annotated with @ResponseBody. The @ResponseBody annotation tells Spring to bind the return value of this method to the body of the HTTP response.

Also, it’s worth noting that this code does not handle any request parameters as it does not take any input from the user, this make this end-point an example of a simple end-point.

Running and Testing the API

With our code written run the following command in order to compile our project into an executable .jar file.

Now, let’s run our simple web API by using the following command in the root directory of the app.

The API is now operational and ready for testing. You can use a tool like Postman to send an HTTP request to the API. The endpoint to get a credit score is localhost:8080/creditscore. When you send a request to this endpoint, you should receive a 200 OK status code as well as a credit score generated by the random number generator.

In summary, we have developed a basic RESTful API using Java Spring Boot. This code can serve as a foundation for creating more complex APIs for your application. As you continue to develop the API, you may want to consider implementing security measures such as an API key, integrating with an API gateway, monitoring the usage of the API, or generating revenue through API monetization. If you are interested in exploring options for API analytics and monetization check out Moesif.

Use API analytics to grow your API

Building a RESTful API with Go and Gin

Looking to build a simple REST API with Go and Gin? Check out how to build one in a matter of minutes.