This guide assumes you are familiar with users and companies already. If not, please review the Introduction to User and Company Analytics

Funnel Analysis are a way to understand where customers drop off as customers use your APIs and products. Funnels are built using a combination of steps which can include specific API calls, but also user actions a customer performed in your UI such as “Signed In”. This enables tracking metrics like Time to First Hello World (TTFHW) and Time to First Working App (TTFWA).

Note that events may take up to 20 minutes to show up in the user analytics screens. If your data has not shown up, please try again later once the data has had time to filter over.

If you’re not familiar with funnel analysis, you should first read Chapter 2 of API Analytics: The Ultimate Guide to Grow Your Platform Business eBook

Funnels compose a series of actions that a single user or company performed whether it’s on the API or within your UI (via user actions). The below funnel has two steps: 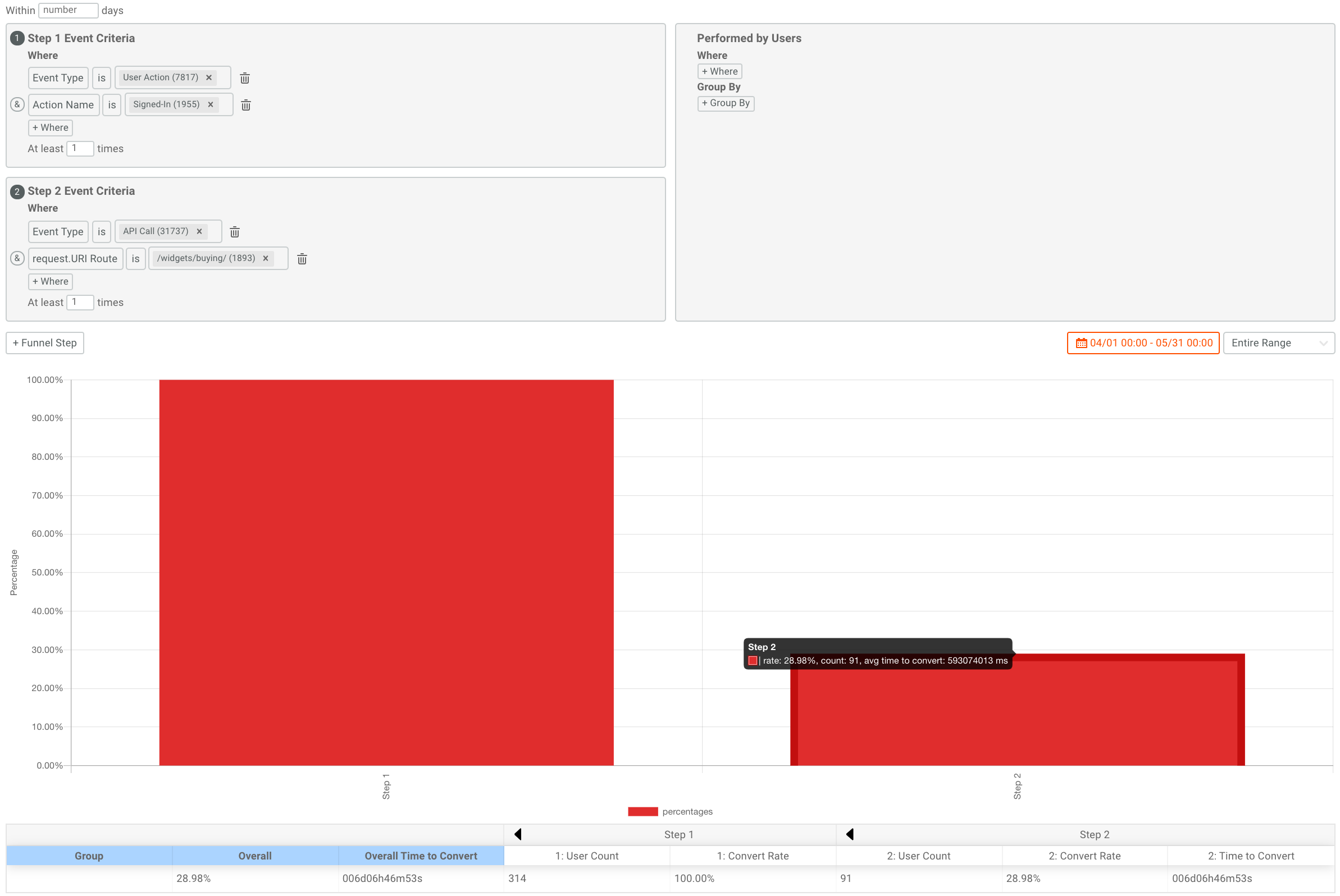 In this case, we can see that only 28.98% of users who signed in also made an API call to /widgets/buying and it took 6 days on average to reach the second step.

You can build funnels with a number of steps which represent milestones a customer has with your API. For example, the beginning of your funnel might start on your website as a visitor signs up to use your API. However, once they created an API key, much of the magic happens on the API side rather than the web side. This means you want to track the customer journey as they make their first API call, then they make enough API calls that they receive value.

The conversion steps can be computed In Order or Any Order.

You can also specify a conversion window which is the time that all the steps must be completed. By default, the steps can be completed anytime within your time period, but you can override this such as to only show customers who covert within a window like 7 days.

You can filter by any user actions you are tracking within your UI liked “Signed-In” or “Purchased-Plan”. You can also formulate steps based on API call properties such as API route, request HTTP headers, or other criteria to narrow down your conversion steps.

You can also specify how many times a user must perform a step before the user is considered converted. For example you may want to understand users who made over a 100 API calls which is your cutoff to consider receiving value from the API.

This can be useful if you want to see the drop off between users who made their first API call and users who made a minimum number API calls (implying a more complete integration).

In the below chart, we see that only 33% of users who made at least a single /search call has also made more than 20 /search calls.

You can also narrow your funnel to specific segments of users or compare across customer segments.

Funnels can be broken down by user or company fields such as acquisition channels or industry to understand which converts the best. In the below example, we are grouping by UTM source which is a property automatically tracked by moesif-browser-js to understand which paid marketing channels drive the most integrated users. 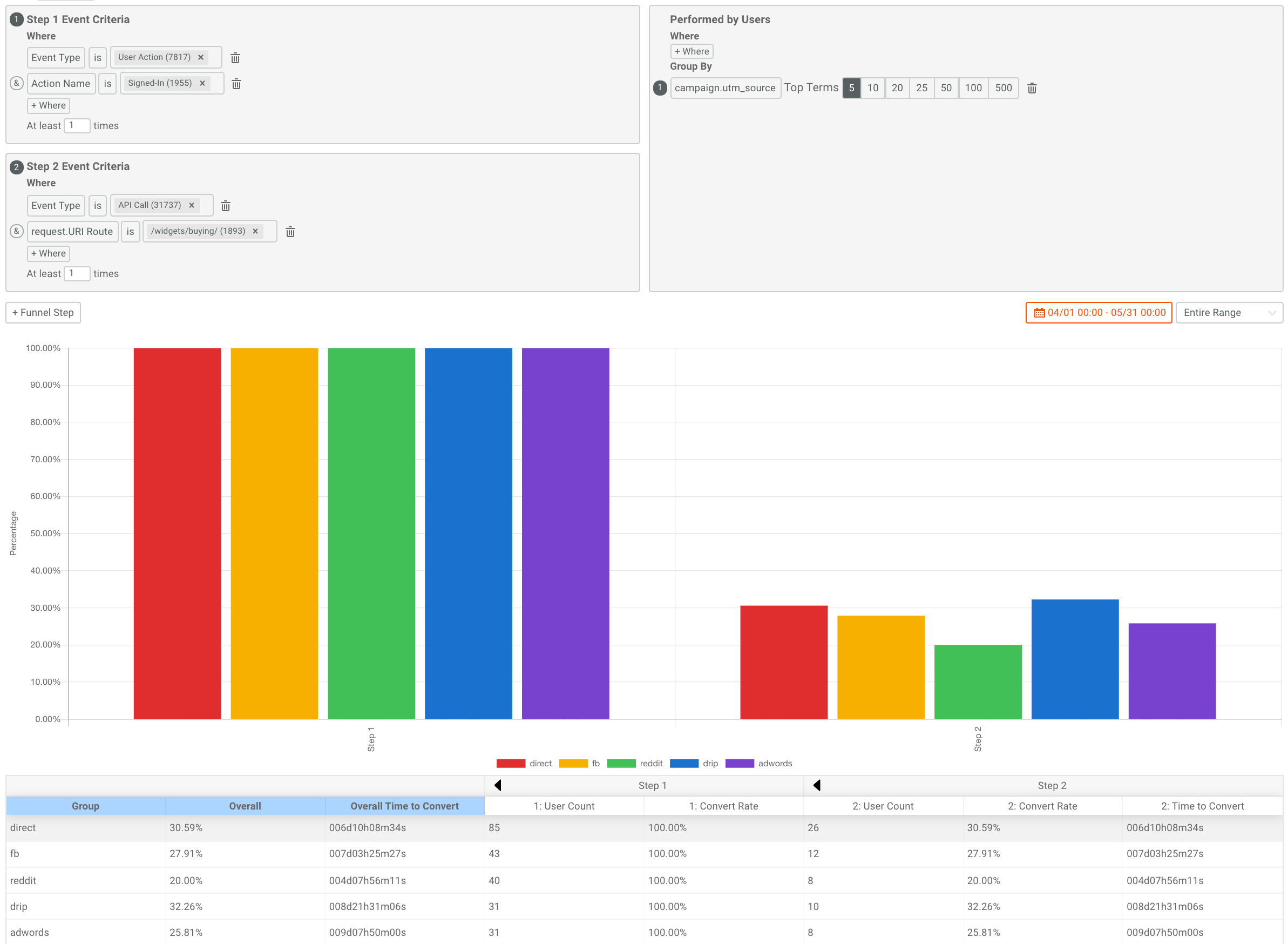 If you want to narrow down your funnel analysis to a specific segment of users, you can do so with the user filters. For example, to show only new users created within the last 4 weeks and also are located within the United States, you can add two WHERE clauses like so. Users who don’t match your criteria are not considered as entering the funnel.

Any fields that you saved as part of user profiles are available in funnel analysis.

Conversion over time shows conversion rates for users who entered the funnel on a specific date. So if a user entered the funnel on November 30th, but completed Step 2 on December 3rd, that user will be counted for the November 30th day. All dates are aligned to top of the calendar date. So daily is midnight to midnight whereas monthly is start of the month to end of the month.

The below graph shows the conversion rate broken down for each day for the last 7 days.